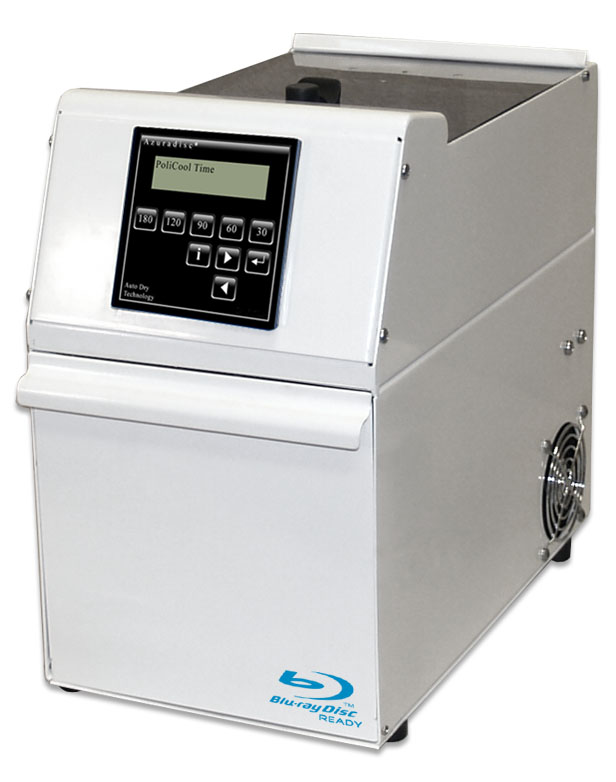 This is the latest machine in the Disc Clinic offer. After in September 2010 American company the Azuradisc withdrew the model 1600, which was very successful on the international market, the Uno had its premiere. The increasing technological development, introducing the Blu Ray carrier, and the growing requirements of customers caused that the multi-step devices aren’t so popular for customers any more and they have to give place to the more advanced machines, such as The Uno. We describe the most significant technological solutions that have been applied in this innovative machine:

New Quick Load 2 The disc spinners are now built within the lid system and contain a floating spring mechanism that automatically maintains pressure from disc to disc. This new design eliminates the need to tune the machine differently for PS 1 or other disc types that would normally require an adjustment. This means you can repair ALL disc types in one MACHINE without tuning! This also allows you to repair the same discs multiple times without machine adjustments. This is by far the easiest load / unload system available for desktop disc repair machines. New in Version 2 (Quick load 2) is a completely *d sliding mechanism that is virtually maintainence free, one set screw access, machined with precision 6061 Aircraft grade aluminum and clear hard coated, these are industrial strength components.

New Dual Sealed Ball Bearing design We have upgraded the spinner mechanism to handle 2 sets of bearings. Not only does it create a smoother operation, the new Dual Bearing design increases the operational life of the head and is completely sealed. These new bearings are now expected to last 2-3 times longer than our previous design, while also running quieter and longer than ever before and on top of all that they are virtually maintainence free!

New Final Auto Finish Pad- Yes, its built into the process, this is not an additional step. Not only does this machine remove deeper scratches in less time than any previous design, we went one step further and added a final finishing pad. This pad, polishes and wipes the disc during the drying cycle, removing the liquid and polishing the surface to a like new finish. Until now a auto-wiping feature was only available in the expensive machines priced at $5,000 and up. The discs come out so clean and dry you can place them straight into the case, or if you want to wipe them, just dust them off with a dry cloth, no more wet discs, or need to spray and wipe off messy compounds. The best part of this finishing pad is how shiny it makes your disc, no whispy repair lines, the finished disc looks like brand new!

New Automatic Mixer- A.T.L.A.S.T., (Auto Timed Liquid Abrasive Suspension Technology). This is a new breakthrough system that makes deep scratch removal and final finishing possible in a single step. Not only does it eliminate the need to shake your polish, it actually keeps the abrasive material suspended during the repair cycles. Liquid abrasives that are designed to remove deep scratches typically settle too quickly for practical use, the deeper scratch you want to remove, the heavier the abrasive content, and the more often you have to shake it up to get agressive repairs. Until now a highly concentrated abrasive formula was impractial to use. Now after years of research, we found timing the exact suspension is critical to match up with the chemistry, and thermal properties of the liquid abrasive. The result is this new breakthrough system that makes operation a breeze. To make the system work, we not only developed the Auto-Mixer, we actually redesigned the liquid formula (Policool 4.0) to work with the mixing system. The result is that you don`t have to remember to shake the liquid, in fact you dont have to do anything regarding the liquid, it is now a hands off system! The onboard Microprocessor turns the mixer on and off automatically. The liquid abrasive is returned to the cartridge at the end of the process. ATLAST! a simple solution we have all been waiting for!  (Source: Azuradisc Inc.)

After the tests in Disc Clinic:

We received from the manufacturer one of the very first test machines at the beginning of September. The Uno looks as if it had smaller capabilities than it actually offers. Small dimensions in comparison with the Dual Disc II, which lent the major regeneration technology, may misinform about capabilities of this compact unit. First contact... and to my surprise, I can see the most up-to-date technologies in the field of the disc regeneration after I have opened the cover and side doors. New sealed system, which makes the assembly of a disc really easy, A.T.L.A.S.T. technology, which joins the quickened, the more accurate regeneration process (that replaces a multi-step process) and the automatic mixer, which continues to maintain the PoliCool in the optimum condition in order to start the regeneration process, are just some of these particularly helpful news. Let’s start then! We assemble a scratched disc in the machine- as I have mentioned before, the process is a piece of cake – click… and the disc is ready to be repaired. The disc isn’t severely scratched, these are rather average scratches, and so I decide on the shortest mode of 30 seconds. After 30 seconds, the disc has been repaired to its factory features- there are no scratches and the surface is perfectly smooth and shiny. What is even more important, I don’t have to use any cleaning liquid, as the disc is dry. The only thing I should do to achieve a final wipe, is two wipes with the Azuradisc cloth. Now it’s time to check, whether the unit is good at the removing of the extreme scratches! I do scratches on a disc with a kitchen knife, and additionally, I rub the disc against a wall several times. After the longest cycle of 180 seconds, the disc looks flawless. All the scratches have disappeared and the surface, just like in case of the other disc, is unexceptional. To sum up, for the first time in my life I have tested a complete machine, which not only removes the scratches simply perfectly, but it also definitely minimizes the service time. The machine is fully compatible with Blu Ray (PS3) carriers, as well as with all other types available on market. If God created the disc regeneration machine, he would look up to heavenly The Uno.

The test was conducted by: Krystian Kowalik – Disc Clinic